This past week our family traveled to Southern California for a reunion at Disneyland and while we were there I wanted to check out fun places to eat in the area that are outside of the theme parks.  We don’t travel down that way very often but I had always wanted to take my boys to Medieval Times Dinner and Tournament.  With horses, knights, kings, jousting, sword fighting, etc. it seemed like it would be the perfect dinner and entertainment for my boys and it far exceeded our expectations. 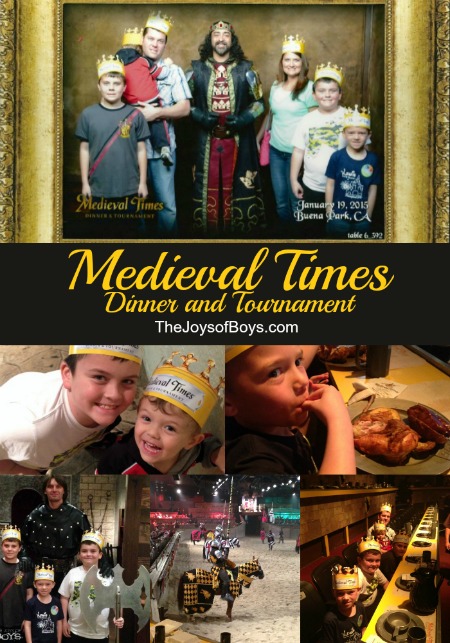 Our family received tickets to attend Medieval Times Dinner and Tournament.  From the moment we arrived at the castle, I felt as though we had been transported back in time. 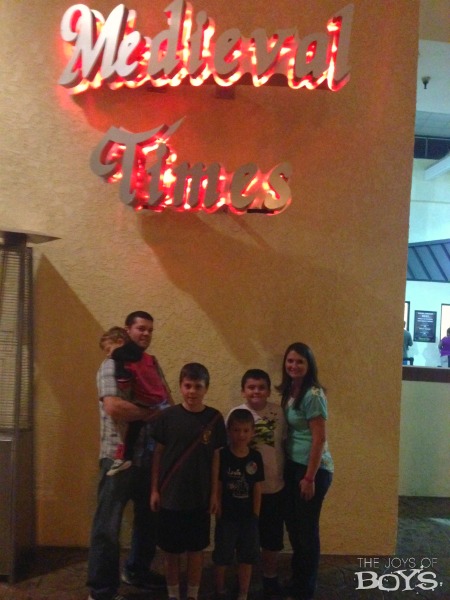 We were given crowns and a color-coded card that would tell us which knight we would be cheering for. We were then invited to meet the king, which of course to commoners like ourselves, was quite an honor. 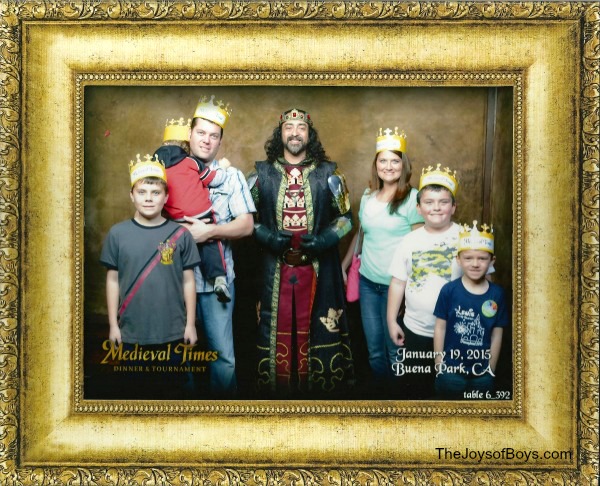 Our “little king” had fallen asleep on the way to dinner so he missed out on a little bit of the excitement but was awake as soon as the festivities started. 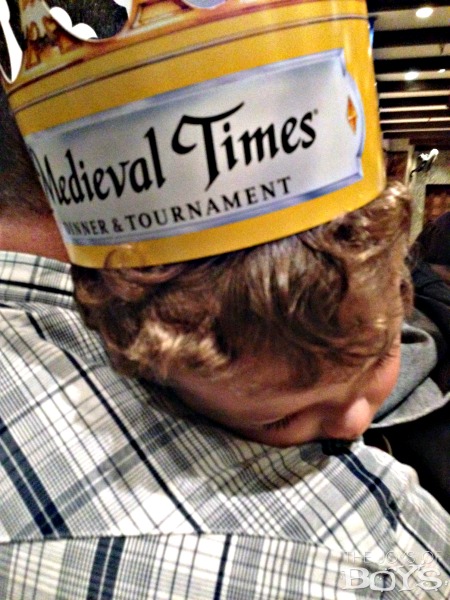 While waiting for the tournament to begin, guests can visit the horses, browse the shops for the best in Medieval apparel and goods,  grab a drink and visit with some of the members of the King’s court.  Plus we were able to watch a guest as they were knighted by the king himself. 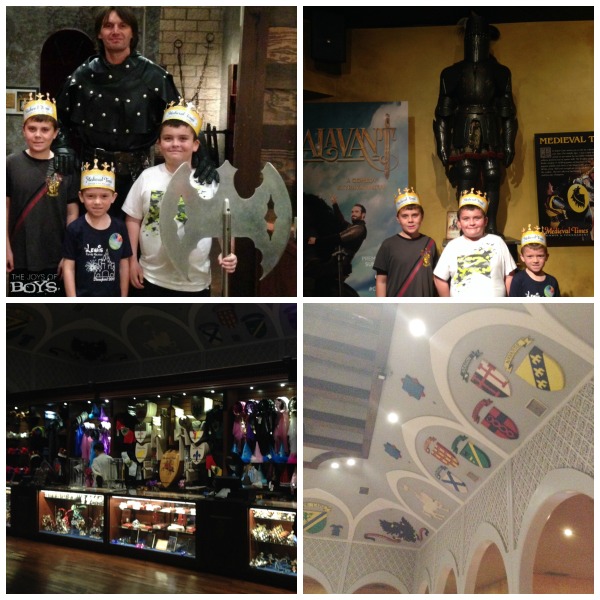 Once the doors were opened, we were able to enter into the King’s Hall to be seated for dinner. 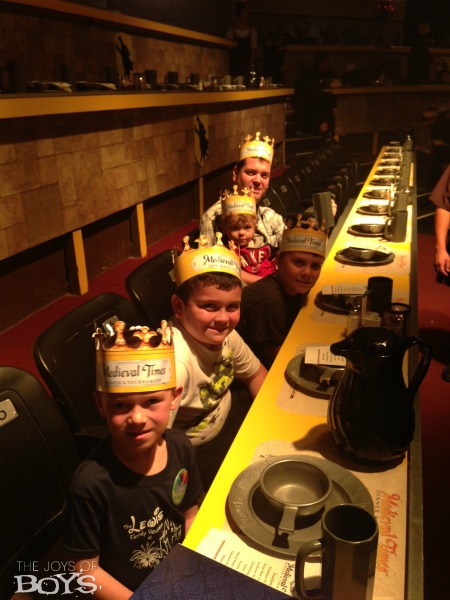 Everything seemed authentic, from the dishes to the actors and we were excited to cheer on the Yellow Knight, who gave us a good laugh as he kissed daisies and threw them into the crowd and waved his golden locks of hair. 🙂 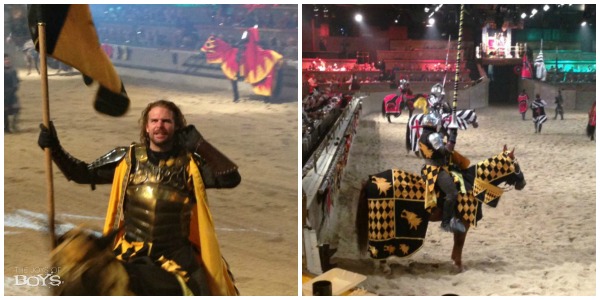 We were entertained by dancing horses and friendly competitions while our dinner was served. 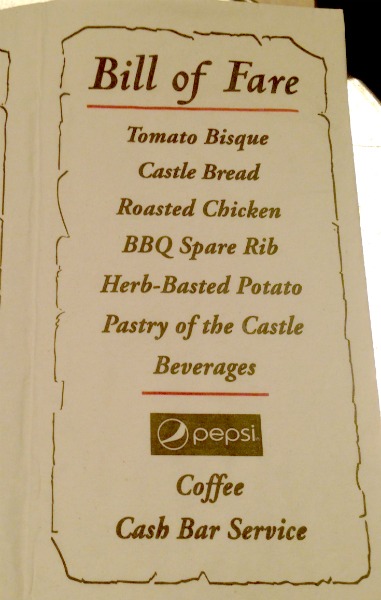 We started our meal with Tomato Bisque served piping hot by Serf Ruben as well as a yummy slice of Castle bread. 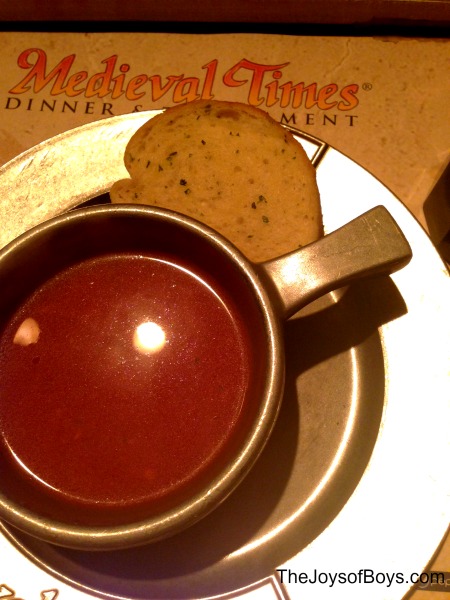 This was followed by Roasted chicken (or baby dragon as Ruben called it), BBQ spare ribs, and Herb-basted Potato.  And the BEST part, according to my boys, is we got to eat with our hands! 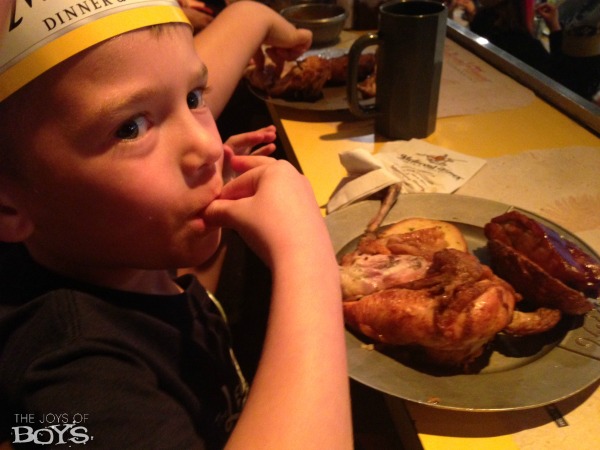 My six-year-old said, “Mom, you mean we’re SUPPOSED to eat with our hands?”  And he was surprised that baby dragon tastes just like chicken! 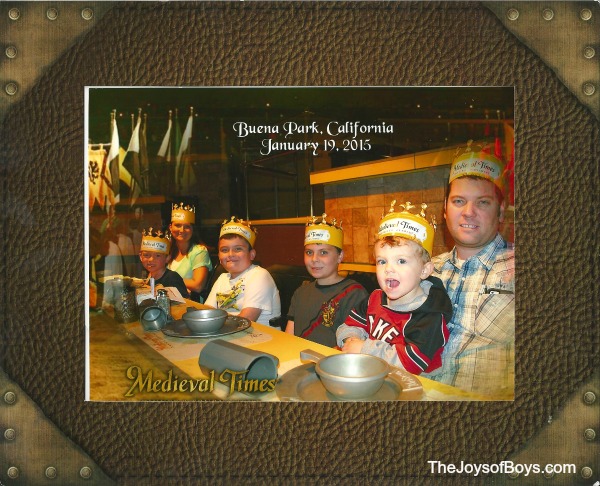 As the dinner progressed the games became more challenging and soon the knights were jousting and fighting to the death.  We were sad to learn that our Yellow Knight was killed in battle.  But other than the death of our knight, we had an amusing and entertaining evening with delicious food, a perfect ambiance, and delightful entertainment.

Medieval Times Dinner and Tournament has 9 locations throughout North America and Canada and we loved the Buena Park location.  You can learn more about Medieval Times at MedievalTimes.com and by following along with them on Facebook, Twitter, Instagram and Youtube.