The Invisible Mom – What You Are Building When No One Sees

Do you ever feel like an invisible mom? As though the things you do and the efforts you make as a mother go unnoticed?  Today I share my experiences as well as a beautiful message from Nicole Johnson about what you are really building when no one sees.

(I originally posted this as one of my first blog posts in 2012 but wanted to re-share it with you since this story helped me through a difficult time in my life.) 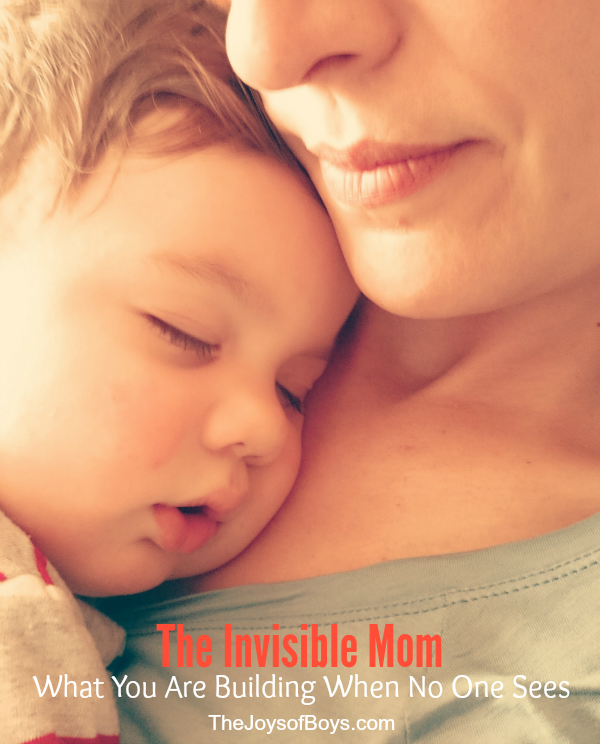 Not long ago I thought I had my life pretty much figured out.  Ever had that feeling?  The feeling that you finally know exactly how you want your life to go and what you want to do with your life.  You feel content and you look at the future and begin to make plans to reach your goals.  You think that everything will fall into place and then…you blink and one second later nothing goes as planned.  Everything that at one point was so right for you suddenly becomes so wrong for you and everything you thought you wanted is suddenly NOT what you want. About 6 months ago my life did a 180°.   I pretty much had my life planned out but then I was reminded that life doesn’t always go as planned and that isn’t always a bad thing.

I was pregnant with baby boy #4 when I was completely and totally knocked off my feet.  I spent 4 months on bed rest with constant pricking, poking and needles to stop contractions and to control gestational diabetes  (ugh!) And on top of that, I got the worlds worse sinus infection.  I remember sitting up one night really thinking that I would die.  But it was during that time, when all I could do was lay in bed and think,  that my life goals became very clear to me.

I had been working in and out of the home at the time and I loved my job.  But during those days and nights of laying in bed, I realized that I didn’t need extra money or extra recognition that my job had given me.  A lot of people depended on me at the time and I loved meeting new people but I didn’t need to be spending so much of my time doing it.  What I really wanted and needed was to be able to give my boys more of my time and mental attention while they are little.  To be not only present physically but mentally as well.   I wanted to be standing at the crossroads of their lives and not just a bystander who occasionally would wave from the sidelines.

I decided to quit my job and it was a very difficult decision to make but around that time I came across the following story.  It helped me to really see that the business I had been building was nothing of importance in comparison to what I am building in the walls of my own home.  No one can take my place in the lives of my children.  I know that the next time I blink it’s very possible that they will be leaving the nest and branching out on their own and I don’t want to look back with regret on the few short years I get to have them in my home.

I know it is hard to be a mom.  It is really, really hard!  It may seem like nothing we do really matters or is even recognized.  It may also seem as though there are more important things that we could be doing that would make a difference in the world, but in the end, nothing compares to what we are building within the walls of our home.  The next time you feel invisible, read the following story and remember just how important you are.  I hope you love this story from Nicole Johnson that she shares in her book,  “The Invisible Woman: When Only God Sees.”

It all began to make sense, the blank stares, the lack of response, the way
one of the kids will walk into the room while I’m on the phone and ask to be
taken to the store. Inside I’m thinking, ‘Can’t you see I’m on the phone?’

Obviously not; no one can see if I’m on the phone, or cooking, or sweeping
the floor, or even standing on my head in the corner, because no one can see
me at all. I’m invisible.. The invisible Mom. Some days I am only a pair of
hands, nothing more! Can you fix this? Can you tie this? Can you open this??

Some days I’m a crystal ball; ‘Where’s my other sock?, Where’s my phone?,
What’s for dinner?’

I was certain that these were the hands that once held books and the eyes
that studied history, music and literature -but now, they had disappeared
into the peanut butter, never to be seen again. She’s going, she’s going,
she’s gone!?

One night, a group of us were having dinner, celebrating the return of a
friend from England . She had just gotten back from a fabulous trip, and she
was going on and on about the hotel she stayed in. I was sitting there,
looking around at the others all put together so well. It was hard not to
compare and feel sorry for myself. I was feeling pretty pathetic, when she
turned to me with a beautifully wrapped package, and said, ‘I brought you
this.’ It was a book on the great cathedrals of Europe . I wasn’t exactly
sure why she’d given it to me until I read her inscription: ‘With admiration
for the greatness of what you are building when no one sees.’

In the days ahead I would read – no, devoured – the book. And I would
discover what would become for me, four life-changing truths, after which I
could pattern my work: 1) No one can say who built the great cathedrals – we
have no record of their names. 2) These builders gave their whole lives for
a work they would never see finished. 3) They made great sacrifices and
expected no credit. 4) The passion of their building was fueled by their
faith that the eyes of God saw everything.

A story of legend in the book told of a rich man who came to visit the
cathedral while it was being built, and he saw a workman carving a tiny bird
on the inside of a beam. He was puzzled and asked the man, ‘Why are you
spending so much time carving that bird into a beam that will be covered by
the roof, No one will ever see it And the workman replied, ‘Because God
sees.’

I closed the book, feeling the missing piece fall into place. It was almost
as if I heard God whispering to me, ‘I see you. I see the sacrifices you
make every day, even when no one around you does.

No act of kindness you’ve done, no sequin you’ve sewn on, no cupcake you’ve
baked, no Cub Scout meeting, no last minute errand is too small for me to
notice and smile over. You are building a great cathedral, but you can’t see
right now what it will become.

I keep the right perspective when I see myself as a great builder. As one of
the people who show up at a job that they will never see finished, to work
on something that their name will never be on. The writer of the book went
so far as to say that no cathedrals could ever be built in our lifetime
because there are so few people willing to sacrifice to that degree.

When I really think about it, I don’t want my son to tell the friend he’s
bringing home from college for Thanksgiving , ‘My Mom gets up at 4 in the
morning and bakes homemade pies, and then she hand bastes a turkey for 3
hours and presses all the linens for the table.’ That would mean I’d built a
monument to myself. I just want him to want to come home. And then, if there
is anything more to say to his friend, he’d say, ‘You’re gonna love it
there…’

As mothers, we are building great cathedrals. We cannot be seen if we’re
doing it right. And one day, it is very possible that the world will marvel,
not only at what we have built, but at the beauty that has been added to the
world by the sacrifices of invisible mothers.” -Nicole Johnson

25 Ways to Get out of the Mommy Rut 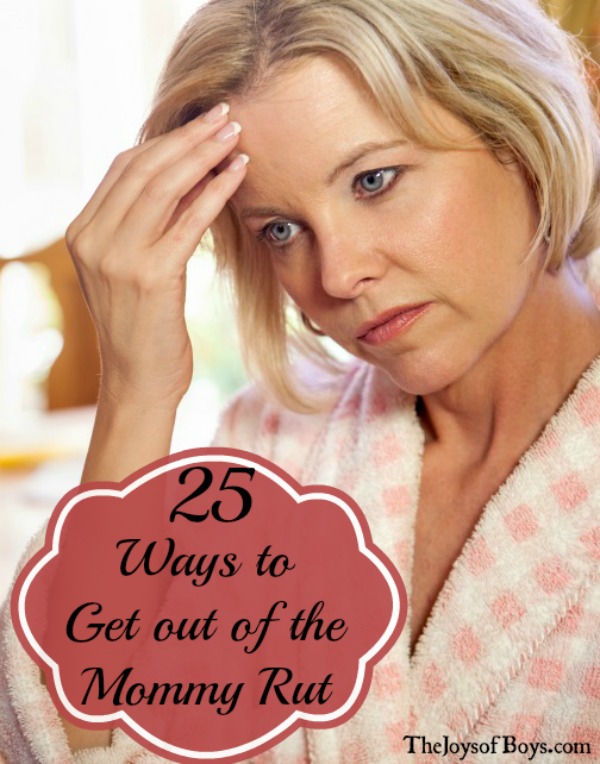 1o Ways to Balance the Juggling Act of Motherhood 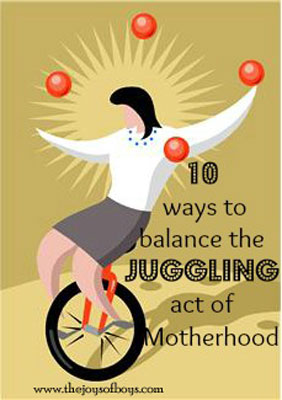 The Invisible Mom – What You Are Building When No One Sees was last modified: May 1st, 2019 by Kara