Monday Motivation:Shake it off and Step Up

Today I just want to share a fun little story, The Donkey in the Well, with you that I heard at a conference a couple of years ago.  This goes a long with, Are you a Bouncer or a Splatter, that I posted last week.   Have you ever just had one of those days, weeks, months or maybe even years where it seems like life is just throwing dirt at you?  We’re half way through January and maybe all of those resolutions you made have already been thrown out the window for one reason or another.  Or maybe you were hoping for some big change to come into your life and instead you get frustration or even heartbreak.

One thing I’ve found is that sometimes when we start walking towards our goals or our dreams it seems like there is always someone there to throw dirt at us.  Someone trying to keep us down or who is just indifferent, when you want them to be supportive.  If that is how you are feeling right now, I want you to think of a donkey named Jack. 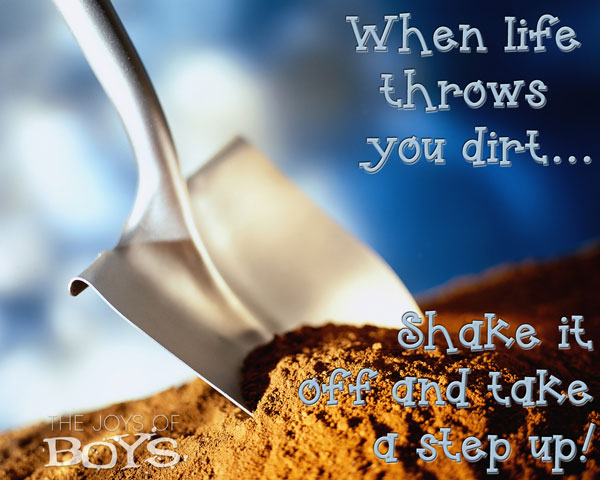 The Donkey in the Well

Jack was a donkey who fell in a well.  The farmer tried everything he could to try to get him out, but in the end he feared that there was no hope for Jack and the farmer decided to just bury him.  For every shovel of dirt that the farmer threw on his back, Jack shook it off and used that dirt to take a step up.  Over and over this happened and each time he had more dirt thrown on him, he shook it off and took a step up.  Pretty soon,  Jack was able to walk out of the well and didn’t have to succumb to the fate that the farmer had planned for him.

Is life throwing you dirt? You can either let it bury you or you can shake it off and take a step up like the donkey in the well.  We can either let our struggles weigh us down or we can use them to help us get where we want to go.

Next time you face an obstacle, think of this story.  Shake it off and take a step up!

Monday Motivation:Shake it off and Step Up was last modified: July 17th, 2013 by Kara