This past week my boys were thrilled to be a part of the “Race Around America” Interactive Promotion Presented by Balance™ Financial Prepaid MasterCard® from Walgreens and Roush Fenway Racing.  Our family was invited down to Walgreens on the Las Vegas strip to welcome NASCAR driver Greg Biffle and the Roush Stage 3 Mustang that will be given away as a Grand Prize at the end of the promotion. 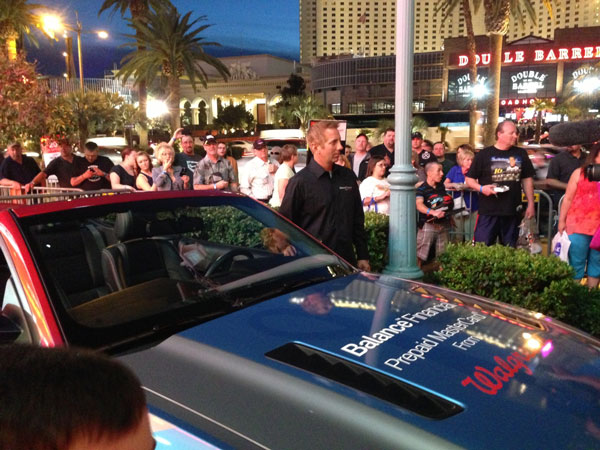 My boys were THRILLED to get to attend the event and wave one of two checkered flags as Greg Biffle drove the Roush Stage 3 Mustang down the Las Vegas strip and into a crowd of cheering fans. 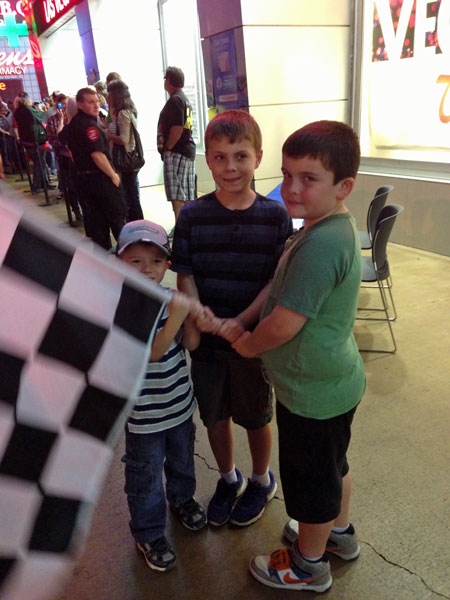 They not only got to wave the checkered flag but also got it autographed and were able to take it home, which they were so excited about. 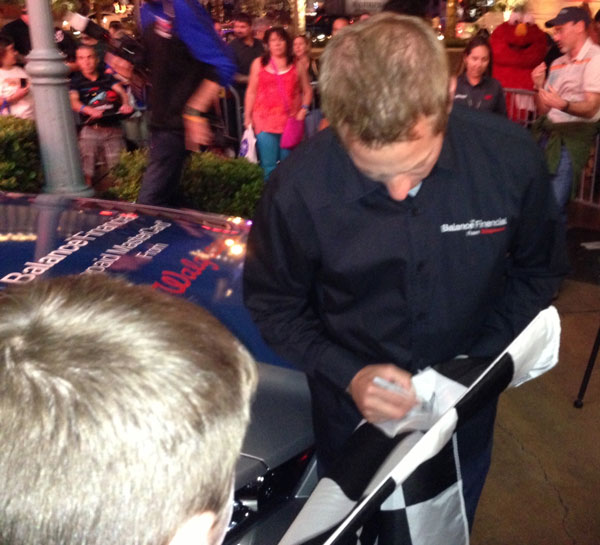 We had the opportunity to do a quick interview with Greg Biffle and my boys were mostly interested in how fast his race car can go.  They were really impressed when he told them it can go as fast as 210 mph!  When asked what he would purchase with his Balance™ Financial Prepaid MasterCard® if he had to make a pit stop at Walgreens, he said hair gel since he had forgotten his.  And in case you are wondering, no he doesn’t wear hair gel while racing.  🙂  He was really fun to meet and is a great person all around. 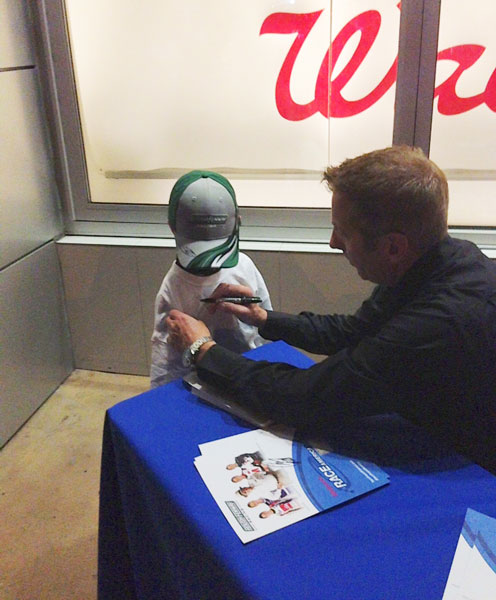 My boys received shirts and a hat that he also took the time to autograph and I have had to pry them off of them to wash them.  Each of my boys sleep in their shirts every night. 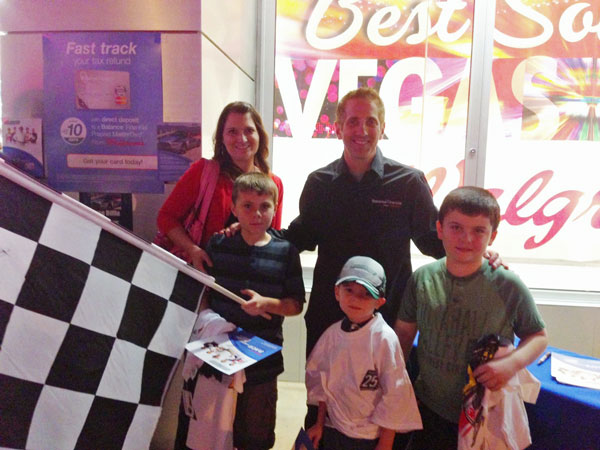 Ever since I was a little girl I told my parents that some day I would own a red Ford Mustang.  Well, so far I haven’t been able to make that happen, but we did get the chance to sit in the Mustang and a girl can dream right? 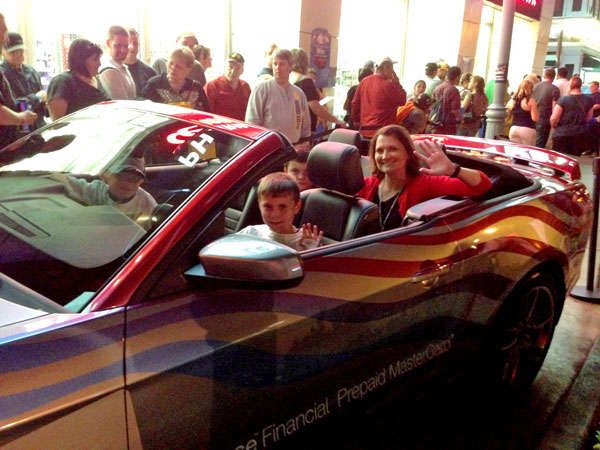 I’m pretty sure this little guy was convinced that we would get to drive it home! 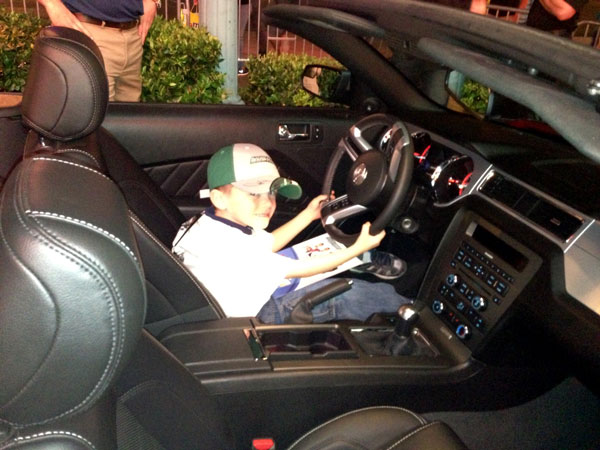 The Balance™ Financial Prepaid MasterCard from Walgreens is the safe alternative to cash that’s big on convenience and small on fees.  Right before Christmas we had someone get access to my husband’s personal debit card number from our bank and drain our bank account.  We were eventually able to get our funds back and get new cards but  it was a long and frustrating process. I’m a busy mom and I don’t have that kind of time.  I love that with the Balance™ Financial Prepaid MasterCard, you can put a limited amount of funds on the card and reload it as needed.  That gives peace of mind knowing that if it were lost or stolen, someone wouldn’t have direct access to your bank account. The Balance™ Financial Card can be used to shop or pay bills everywhere Debit MasterCard is accepted. 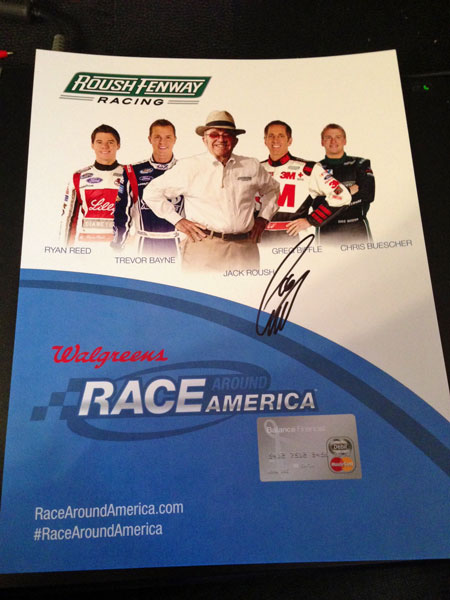 And here is the best part about this campaign. When the campaign is over, someone will win the Mustang! (Fingers crossed!) And, the Race Around America Campaign is unique because the fans get to choose the upgraded features the Mustang will have as well as the cities that the race will stop in next.  Throughout the promotion, Roush Fenway Racing drivers Greg Biffle, Ryan Reed, Trevor Bayne and Chris Buescher will drive the Mustang from a concluding NASCAR race city to the next, making pit stops to meet with fans along the way.  So if you are a big fan of Roush Fenway Racing and NASCAR, visit Race Around America to vote for the upgrades for the Mustang and the route the drivers will take.
And continue to check back because they will be making webisodes all along the race. To see how this all got started, check out this video.

And make sure to check back for the next webisode which will be featuring my boys and their experience meeting Greg Biffle and the Roush Stage 3 Mustang.

For complete rules and regulations of the Race Around America campaign, visit www.RaceAroundAmerica.com.