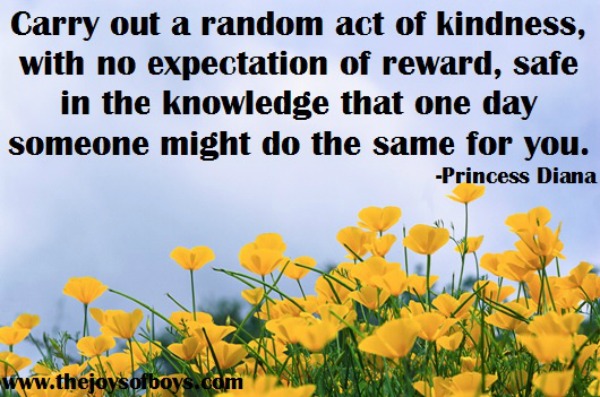 We’ve all heard the term, “Random Acts of Violence”.  It’s on the news nearly nightly.  A few years ago I came across an article in the newspaper about how different our world would be if we started reporting “Random Acts of Kindness” instead and even more importantly, if we focused on doing random acts of kindness to other people.   Today I was the recipient of an act of kindness and it brought that old newspaper article back into my mind.  And even though it was a simple gesture, it made my day.

I got up early today so I could run and do some major, MAJOR grocery shopping while my husband was still home with the kids.  Since we’ve been on Spring Break for the past week and have been traveling and out of town, our house shelves were bare.   I cleaned out everything in the fridge before we left so I wouldn’t have old food to deal with when we got back.

How random acts of kindness made my day

Today I actually felt really bad that I would be holding people up as I checked out.   I had tried to go early enough so there wouldn’t be a lot of people shopping but by the time I had been there two hours or more, people were up and at it.  As I checked out,  I watched several people come to my line, see the amount in my cart and on the belt,  and then roll around to another line and I don’t blame them.  I probably would have done the same thing.  There was the guy in the line next to me who made a comment to his wife about how much he hates “people like that” (whatever that means.  People who feed their kids? People who eat? I don’t know).   And I was working up a major sweat trying to unload my cart so I could finish as quickly as possible.

Here is a picture of the full cart just so you get an idea. 😉 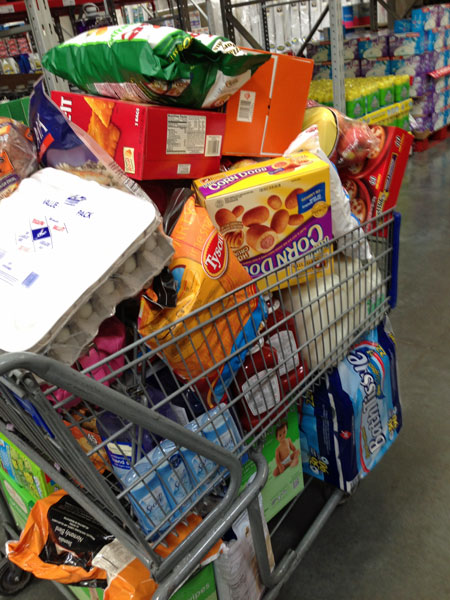 Then, the checker stops working and just stares at me waiting for me to bring him my cart to fill up with items he has scanned.  (Not sure why he couldn’t get a different cart.)  Problem is, because of my amazing packing skills, I still had a full cart of groceries.

That’s when the random act of kindness came in.  A man showed up in my line behind me with only two items. I would have loved to let him go in front but the checker had already started.   (Me feeling even more guilty) but instead of wheeling his cart to another line, he takes his two items out of his cart and offers it to me to fill up.  He then takes the time to help me unload my cart and is super friendly the entire time.  He could have easily gone to a different line and been out in a matter of seconds.

He made small talk about how he hopes I’m shopping for the month and when I tell him I have 4 boys  to feed at home he talks to me about his 6 boys who are all grown but scattered around the world and how he remembered how much food they went through.

As I’m almost ready to leave I apologize again for taking so long and his reply made my day, “It’s okay.  I’m just glad to see that Wonder Woman still exists.”

Simple.  A simple act of kindness made my entire day.  And so today as you are going throughout the day, watch for simple ways that you can help someone out because you never know if that simple act will make someone’s day.

Have you ever been a recipient of random acts of kindness?  How did it make you feel?

How to Make Camping with Kids Easy and Stress-Free…