This is a Sponsored post written by me on behalf of HarperCollins Children’s Books for SocialSpark. All opinions are 100% mine. 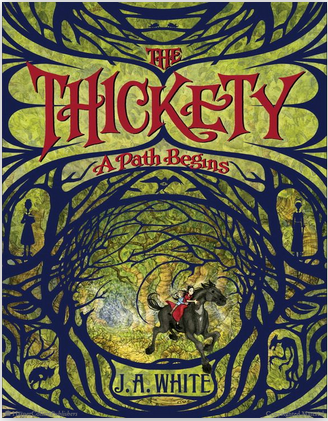 In The Thickety by J.A. White, we discover a world in which a group of village people live in fear of witchcraft and the woods at the edge of town called The Thickety and the creatures that live there.   When Kara Westfall was five years old her mother was accused and convicted of using witchcraft, the worst possible crime, and now as Kara grows up she has to wonder if she also has the powers that her mother had.

One day as she is tending to her field, a bird comes and leads her into the Thickety where she discovers a book that she believes belonged to her mother and with that book came unusual powers that she knows she is forbidden to use.  But, while most people speak of the evil that comes from witchcraft, Kara can’t help but wonder if there is also good that she can do.

The mysterious book gives her powers over the animals on their island but also brings her face-to-face with an enemy who is set on taking the book and using it to gain power over the people of the village.  Will Kara be able to save the village from this evil?

The Thickety was a gripping tale between the powers of good and evil.  I read this with my oldest son because I felt that it was a bit too scary for my younger boys and we couldn’t put it down.  I had actually forgotten that this is the first in a series of books and when we got to the end of the book I was wishing that the next book in the series was already out.  I can’t wait to get ahold of it.

The Thickety was published by HarperCollins Children’s Books which, for twelve consecutive years, has had the greatest number of picture books on the New York Times bestsellers list out of all Children’s Book publishers.