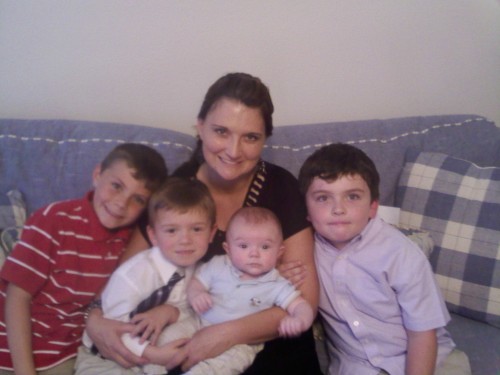 Mama and My Boys

I hope all mothers had a wonderful day yesterday on Mother’s day. My boys made me breakfast and gave me gifts of homemade cards and jewelry and my husband bought me some desert flowers to plant along the side of our house where our strawberries decided they couldn’t stand the heat.  Oh, and he even planted them, which is much better than receiving flowers and then having to plant them myself.   But let’s be honest,  the day after Mother’s Day may seem like somewhat of a let down when the pampering ends and it’s back to reality.

When I was a single girl in college I came across the following story that I have saved over all these years.  I pull it out on those days when I start to wonder if what I am trying to do as a mother is really making a difference and if sacrificing a more glamorous type of lifestyle for dishes, laundry and piles of messes was really worth it.

They Lied to Me About Life… by Jaroldeen Edwards bestselling author

Right after my first novel was published I was interviewed by a large East coast newspaper for a feature article.  The reporters came to my home in Connecticut on a Saturday morning.  They were two attractive and sophisticated New york women who had graduated from a prestigious Ivy League school.  Both had achieved considerable success in journalism.

The lead reporter was about 30, had been an editor of Seventeen magazine, had worked for several major publications, and was now a sought-after feature writer.  She was dressed in the latest fashion and seemed the ultimately successful career woman.

I must confess that I was a little chagrined as the morning progressed.  I was trying so hard to give the appearance of a professional writer, but every few minutes one of my children would pop into the living room with a problem or a question.  My boys were playing a noisy game in the family room, the stereo was on in the basement play room, and the phone would not stop ringing.  Neighborhood friends ran in and out of the doors, and finally, my 5-year-old (who had had enough of having to “stay out of the living room”) came bouncing in with a smile and plunked herself down on my lap.

We finished the interview, which had taken about two hours, and the reporters got up to leave.  The younger one asked if she could use my phone.  As she left, the cool, sophisticated senior reporter walked over and sat down on the couch next to me.

“There’s something I want to tell you, ” she said intensely.

I looked at her in surprise.  Very slowly, she said, “I just want you to know that we were sold a lie.”

“What do you mean?” I asked, totally puzzled.

“I mean, when I went to college they lied to us. ” she replied.  “They told us we were brilliant, and that we had the obligation to seek success.  We were told not to throw our lives away on husbands and children, but to go out into the world and to succeed.  We were told that only through a professional career could we ‘find ourselves’ or live a worthwhile life.

“I just want you to know that this morning I have realized it was all a lie…I would like to tell you I would trade all my so-called worldly success for one day of living your life.”

So to all of the mothers out there who traded sleep for dark circles, the latest hair styles for a  pony tail, long showers for quick ones (or no shower at all), late nights for extra early mornings, stylish heels for tennis shoes,  designer purses for diaper bags,  I hope everyday, not just Mother’s Day,  you feel loved and I hope that instead of focusing on what you may have given up to become a mother, that you love what you got in return.