A few months ago our family had the opportunity to visit Universal Studios and Island of Adventures in Orlando as a part of the Family Forward blogger family retreat.  We had an amazing time and can’t wait to go back!  Here are some of my tips for visiting Universal  Orlando with your family. 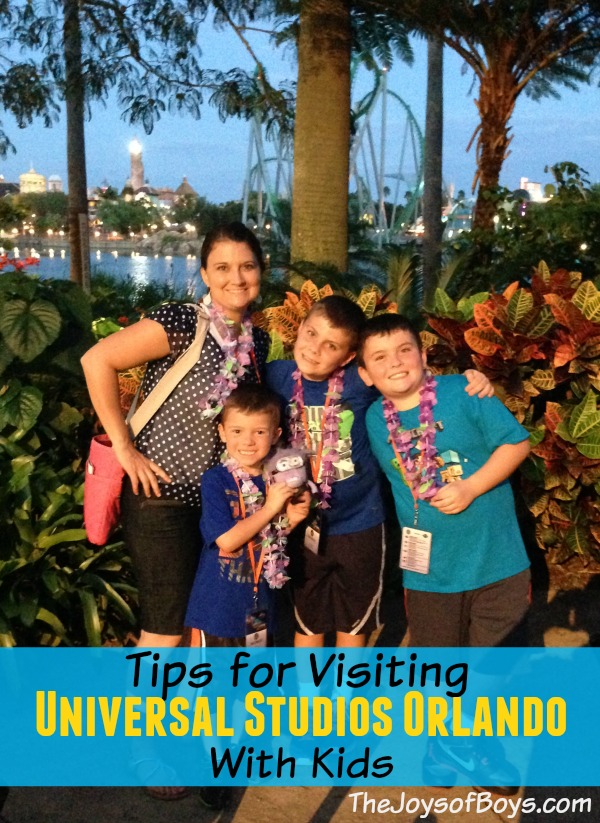 1- Stay at one of the beautiful on site hotels.

There are 4 on site hotels, each unique and fun in their own way.  We stayed at the Loews Portofino Bay and not only was it beautiful, but there were many perks of staying on site such as unlimited use of the water taxi to and from the parks, Universal Unlimited Express passes (SO worth it during the busy season!), and early admission into The Wizardry World of Harry Potter (definitely worth it as well!) .  Check out all of the On-Site Hotel Benefits before booking because some benefits vary by hotel.

I would definitely recommend purchasing Unlimited Express passes if you are not staying onsite (see #1 above) and you are traveling with kids, especially during the busy season.  There were so many times when the lines were really long and the express pass allowed us to bypass the majority of it. I can’t imagine standing in those lines with my kids.  I would say they are definitely worth the extra money unless you have several days to stay in the park and take it slow.

We visited the park with my 3 oldest boys and my 6-year-old was too short for most of the big roller coasters.  Luckily the parks have Child Swap, which is an area where one parent waits with the children who are too short to ride the rides while the other family members can ride.  When they are done, the parents swap.  Bonus for the older kids because they got to ride twice!  Bummer for the younger kids but see #4 below.

4. Get a Height Certificate for Younger children

This is not well-known information and I have heard that it won’t work every time, but when you are in child swap, if you ask a worker for a Height Certificate for kids who are too short to ride the bigger rides, they will give them a signed certificate that will allow them to go to the front of the line with up to 5 family members the next time they come back and they are tall enough.  This saved us A LOT of tears! 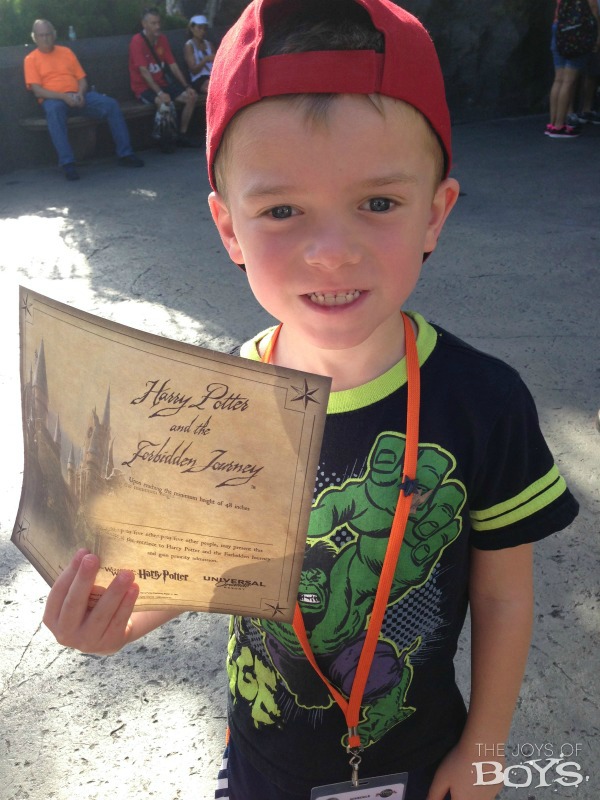 5. Know Height Restrictions ahead of time

Prepare younger children to not be able to ride certain rides.  Between the two parks there are 21 rides with height restrictions, but there are also some amazing areas for younger children such as Seuss’ Landing.  Here is a list of the children’s rides that are great for all ages. If you plan to ride all of the rides within the parks you WILL get wet.  And I’m not talking just a little bit wet, I mean completely soaked head to toe.  We went on Dudley Do-Right’s Ripsaw Falls and  Popeye & Bluto’s Bilge-Rat Barges at the very end of one of our days so we could go back and change and there wasn’t an inch of us that wasn’t soaked.  But they are SO much fun!  Two of my very favorite rides.   Jurassic Park River Adventure will also get you wet depending on where you are sitting but it was more of a single splash to us and we dried quickly.  There are also fun water areas for the little kids to let them run and cool off. Check out all of the Water Rides before you go and take a poncho if you really don’t want to get wet. 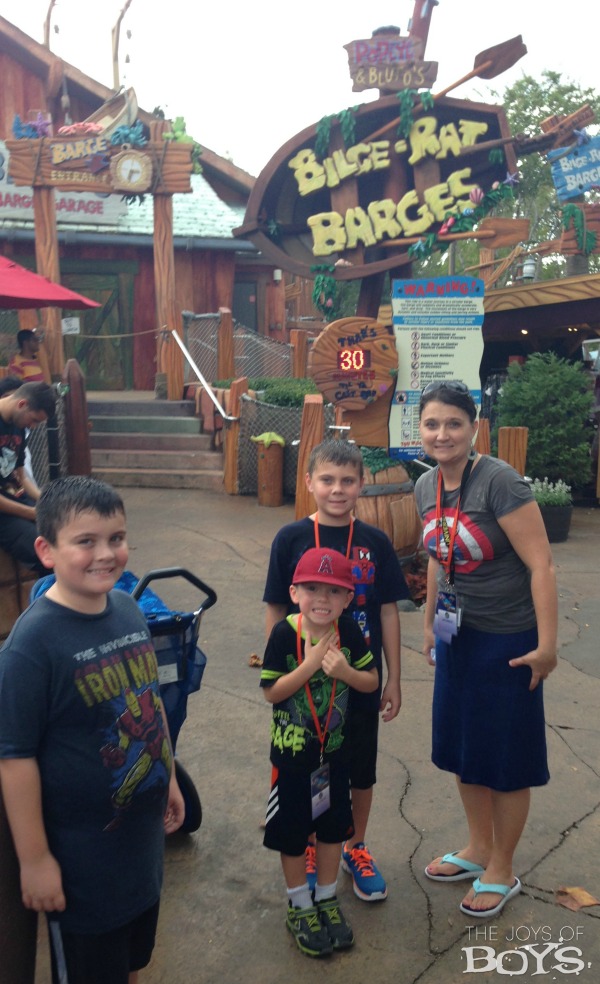 In order to visit both parks you will need a Park-to-Park admission pass.  The main reason I recommend this pass because it is the ONLY way you get to ride the Hogwarts Express and that is an experience you don’t want to miss.  The Hogwarts Express connects the two parks and the Wizardry World of Harry Potter and runs from Hogsmeade to Diagon Alley and back. It is the only way you can experience all of the Wizardry World of Harry Potter in one day.

8. Ride the Hogwarts Express both directions

If you have a park-to-park ticket, make sure you ride the Hogwarts express in both directions because the experience is different each way.  We actually used one of our early entry mornings to go straight to the Hogwarts Express near Diagon Alley and ride it into Hogsmeade.  We were the ONLY people on the train while the wait to get into Diagon Alley was an hour!  We got to have fun going through Platform 9 3/4 without any other people around.  So fun! 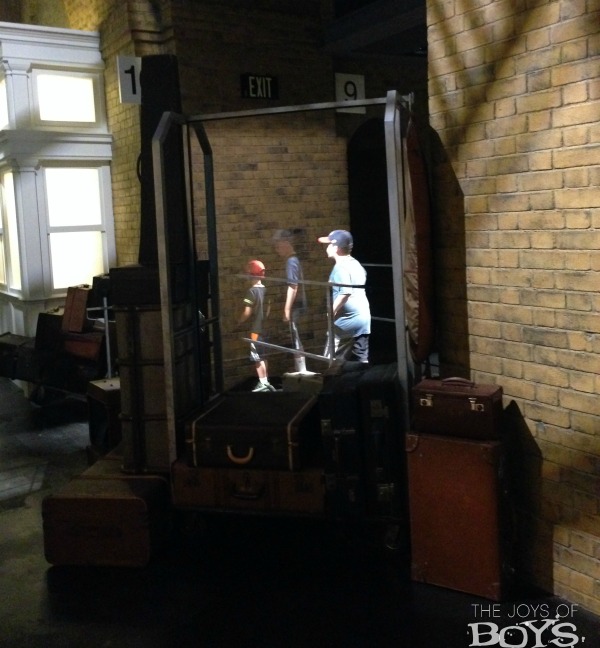 There are pretty much places to get food everywhere you look but the places that I recommend are The Three Broomsticks or The Leaky Cauldron if you are Harry Potter fans.  Everything is as authentic as it could possible get.  Just make sure to get the Butterbeer! We loved it! (And yes it is alcohol free. 🙂 )  There are several other fun options but one less known place is in Springfield at Bumblebee Man’s Taco Truck.  We loved taking a break from heavy theme park food and they had really yummy tacos for a very affordable price.  Plus, they are right next door to Lard Lad’s Donuts (See below).  There are so many places we didn’t get to try so let me know your favorite!  Universal Studios also has a Family Dining plan that you might want to look into. 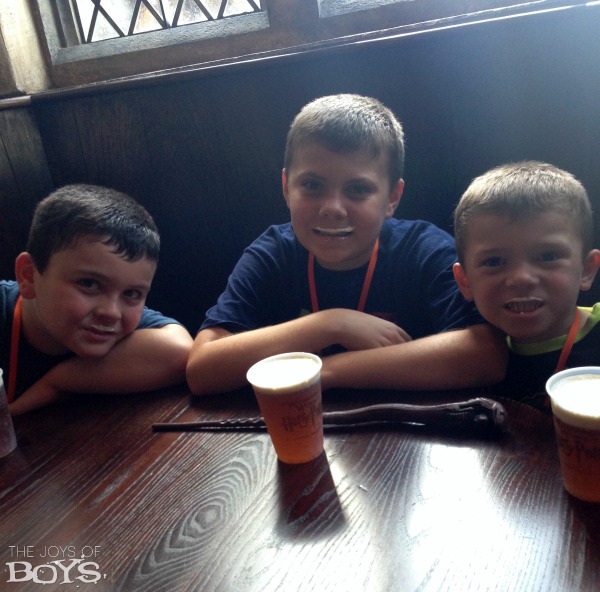 You must definitely get a donut from Lard Lad’s donuts.  I have never seen a donut so large in my life!  We split the entire thing as a family and my boys thought it was the coolest! 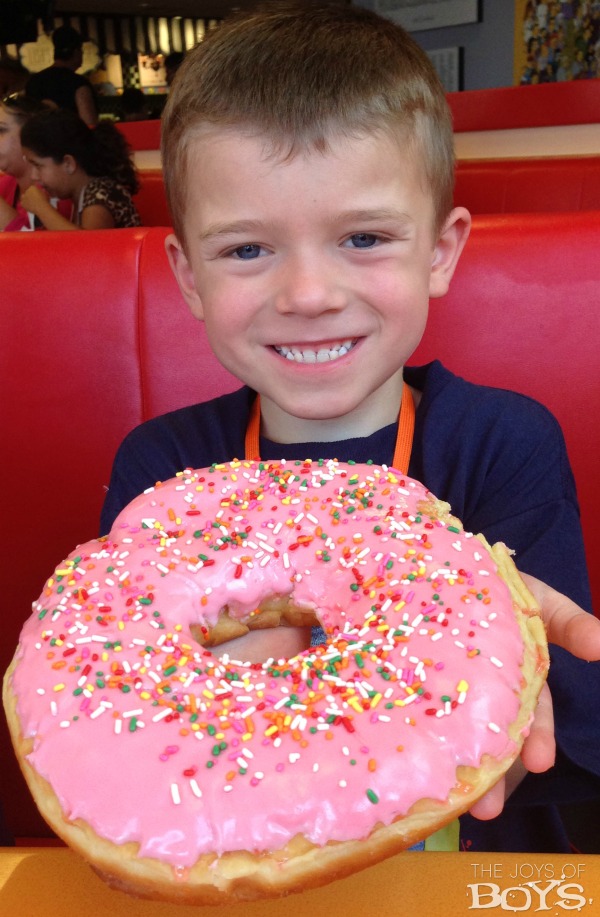 11. Watch for Characters throughout the park

Everywhere we looked in the park we were running into characters. My boys were in HEAVEN (especially my 6 year old) in Marvel Super Hero Island.  Everywhere you look you are surrounded my super heroes and every hour or so some of your favorite super heroes and villains come riding in on motorcycles and let you get your picture with them.  My boys had a blast!  We also ran into several of our favorite characters all throughout the park.  So have your camera ready! 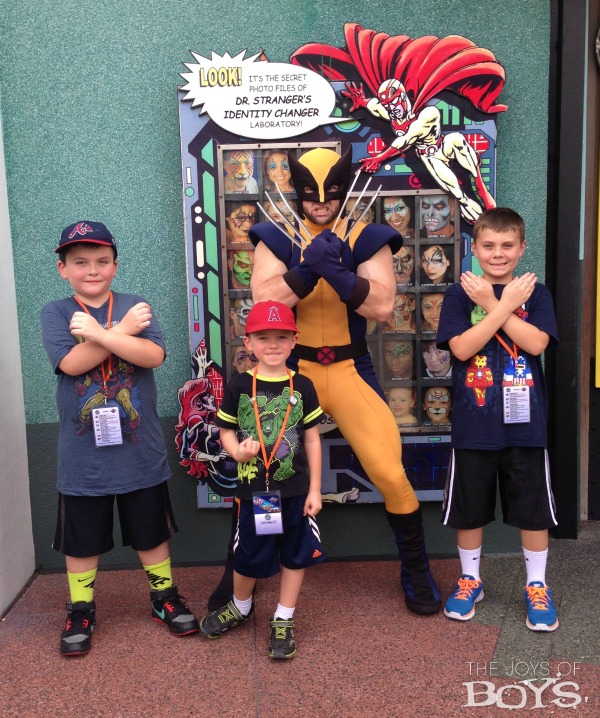 If you’re lucky, you might even run into some Transformers. 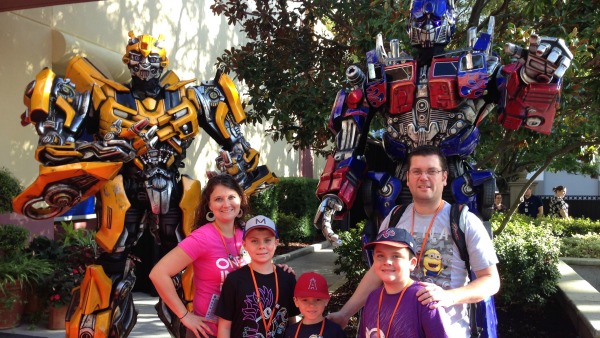 Throughout the park there are different Amazing Picture Photo studios.  where a photographer can take your pictures and put your face/head on a variety of other pictures ranging from celebrities to cartoon characters and more.  I don’t think we have laughed so hard in our lives as we watched our three boys be turned into The Three Stooges and the characters from How To Train a Dragon.  I know this is extra money, but to us it was one of the highlights of our trip. 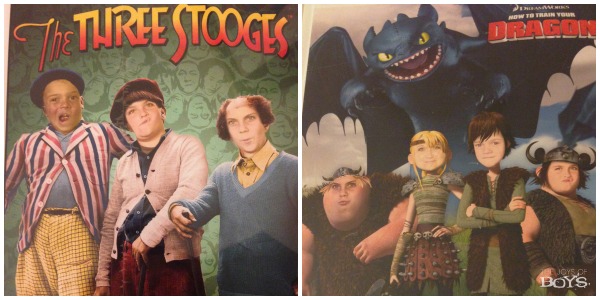 One option that Universal Studios has is to purchase a Photo Connect card that allows you to get all of your ride photos as well as certain character photos saved to a card to print at your leisure.  We thought it was fun having all of our pictures saved but there weren’t as many places to get our picture with characters that I had hoped.  But, we LOVE the pictures we were able to get.  This picture of Jurassic park was worth the entire price of the card to me.  My little guy in the middle had the best expression of all!  He decided that he did NOT want to go on this ride again.

These are just a few of the things that helped to make our vacation to Universal Studios magical.  Make sure you read our post of Top 10 Things to do in Diagon Alley.  My boys are hoping we can make it back sometimes soon.

What Tips for visiting Universal Studios Orlando can you add to this list?

Also make sure to read:

Top 10 Things to do in Diagon Alley 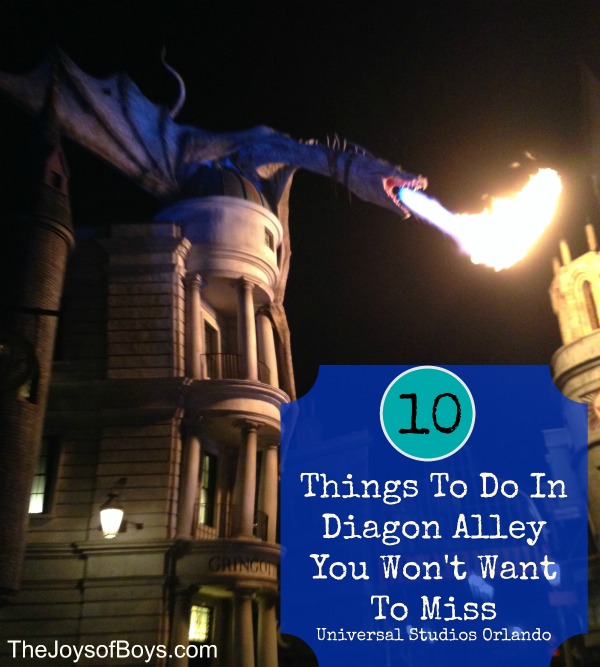