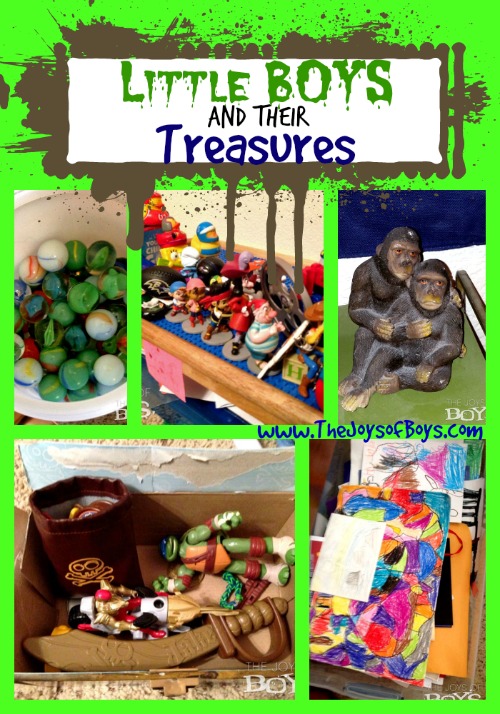 I’ve been a mom of boys now for going on 11 years and pretty much everything I have learned has been taught by experience.   But there is one thing that I wasn’t prepared for and that I didn’t realize was a “boy” thing until I had boys: They love treasures and not the kind of treasures you would expect.  In fact, any random object can become a treasure to them.   I always had envisioned my boys’ rooms decorated like Pottery Barn magazines with everything in its place and organized and my boys acting like little gentlemen (I was WAY off on that one) but what I failed to realize is that the silliest things can become prized possessions for little boys and getting rid of  little boys’ treasures is harder than you might think.

So, let me take you on a tour of what you can expect to find if you visit my house.  Are you ready for this?  Don’t judge me.  😀

It doesn’t help that my three oldest boys share a room that has to hold all of their treasures.  So, we’ll start there: 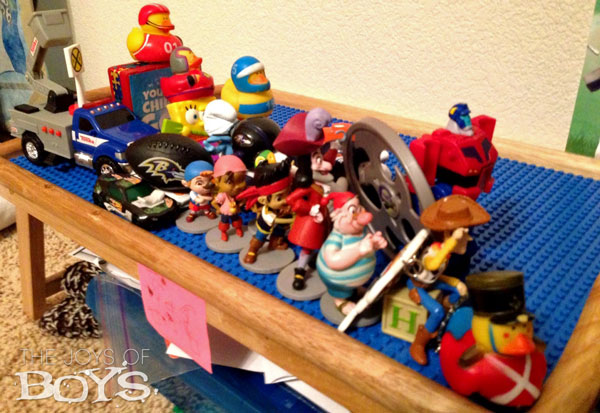 Here we have a parade, led by the marching band duck.  My boys have about 20 little rubber duckies that they have been collecting over the years.  You can see a few bringing up the rear of the parade as well.  And they also hang on to any sort of toy that comes from a fast food restaurant. Today my 5-year-old was super excited to get a new McDonald’s toy to add to his “parade”. You just can’t have enough plastic junk when you are a kid, am I right? My 6-year-old considers this LEGO table as his desk and keeps his best treasures stored underneath it. 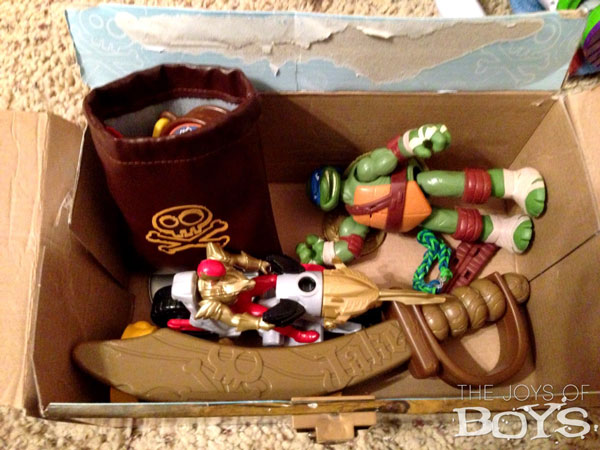 And then under his bed he keeps the really important things inside his broken treasure box. (Anyone know where I can purchase a cheap, but cool treasure box for a little boy?  He loves this one too much for me to get rid of it.)  And of course inside the treasure box is his pirate sword, spotting scope,  bag of gold doubloons, a Ninja Turtle, Power Ranger, and a friendship bracelet. 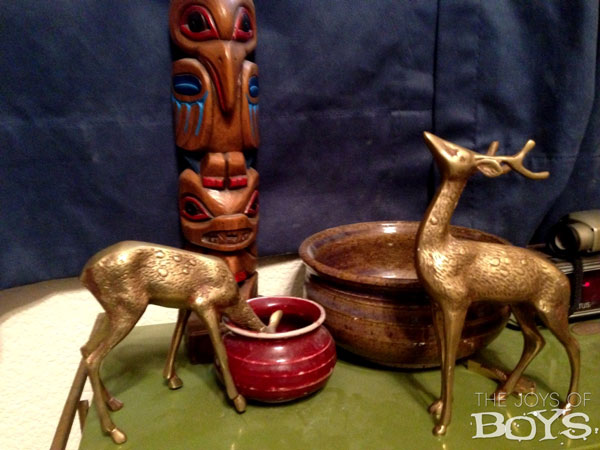 When my grandparents passed away, my boys loved to go over and go treasure hunting through all of the things that had been sorted through to either be thrown away or donated.  We ended up with these lovely “golden” deer (yes they are convinced they are solid gold) as well as a whole bunch of pottery.  My grandparents had a neighbor who made pots.  We called him the “Hairy Potter”.   Haha!  But he gave them A LOT of little pots.  And now they are ours. How lucky are we?  But, I am quite fond of the Tiki statue.  Everyone needs one of those.  Am I right? 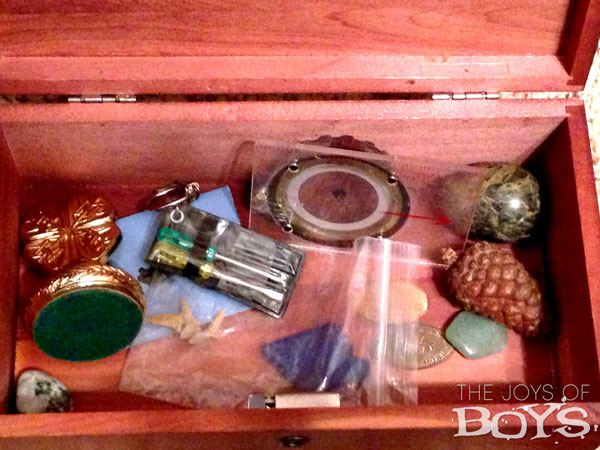 And my older boys have their box of treasures as well.  Their box includes another “golden” statue of the 4-H clover, a mini screwdriver set (just in case), a compass, a rock that is shaped like an egg, a pine cone, some shark teeth and a few other random colored rocks. 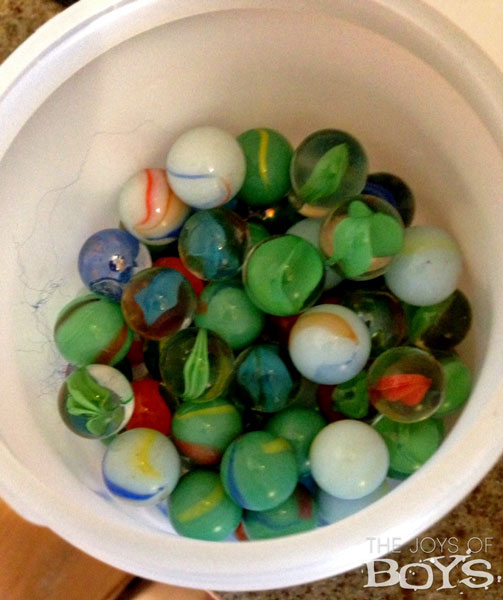 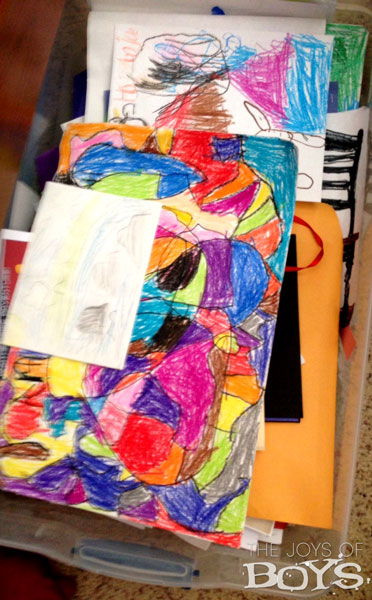 Then, under their bed is a box of all of their most favorite art work that they have made over the years.  When the box gets full, I make them go through it and get rid of some, but not before they make sure we get a picture of it. 😉 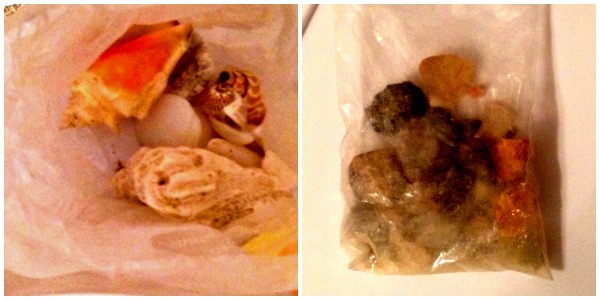 And don’t forget the bags and bags of sea shells and cool rocks.  I find rocks in the most random places.  I finally got rid of a big bag that they had been storing in the garage for a few years.  We live in the desert.  We have plenty of rocks outside if they ever are in dire need of a rock.

And last but definitely not least:  Drum roll please!! 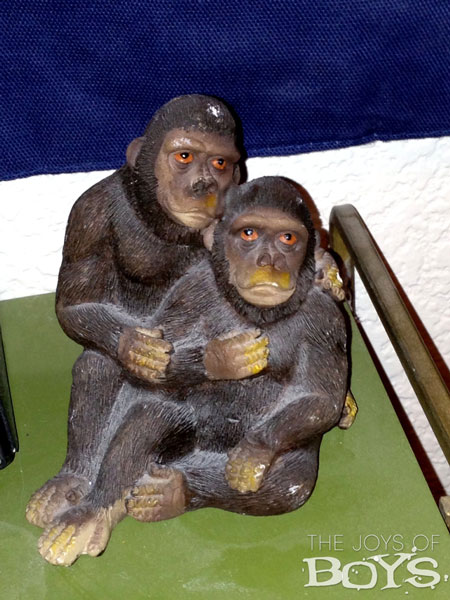 The loving monkeys!  These were my prize at a white elephant party probably about 5 years ago and became the newest members of our family I guess.  My boys have each taken a turn having these monkeys as their favorite treasure and now I find it almost too hilarious to get rid of them.  Every time I look at them I get a good laugh, (and a little creeped out!)

Do your boys have “treasures” that they have to hang on to?  What is their most hilarious treasure that they just cannot part with?

And I love this post from Kids Activities Blog on Organizing Kids Treasures.  I am definitely going to be using her suggestions, not just for my boys but my husband too.    That garage will get cleaned whether he likes it or not. Ha!