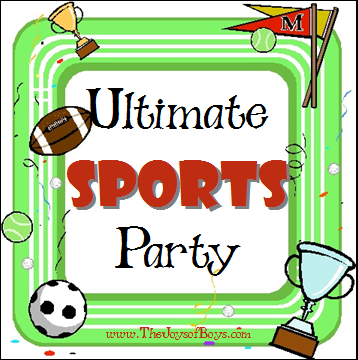 This past weekend we celebrated my son’s 7th birthday party with 14 of his friends.  He loves playing sports and even says he wants to be a professional basketball player when he grows up 😉 so we knew that a Sports Birthday Party was in order.

As I showed you last week we made a M&M’s basketball cake for his actual birthday and then had his birthday party at the park on the weekend.  I think I finally got it right this year when i decided to have the party at the park.  It was PERFECT!  Plenty of room for all of the little guys to run around and get crazy without me stressing out about my house.  Why did it take me so long to think of that?  But with the games/activities we had planned we knew a sports birthday party needed to be somewhere with more room to run. 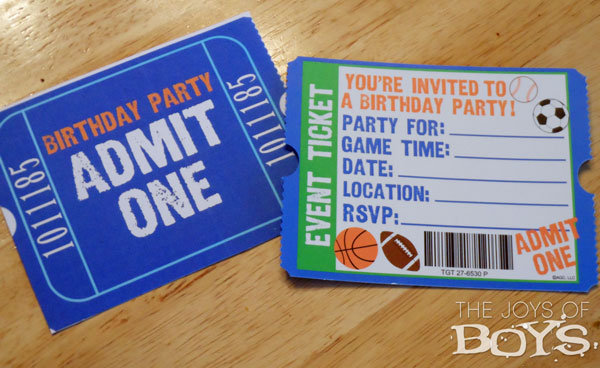 I found these cute birthday invitations at Target and they fit our theme perfectly.  I wish I could say that I was crafty at making stuff like that but I’m definitely not.

Once the kids all arrived we started the festivities.  Our first game was a game of Hot Potato and I turned our Hot Potato

into a football with just a little bit of masking tape. (Just an FYI, if you buy a Hot Potato game make sure it is a soft one.  We have a hard plastic one as well and things don’t go so well when kids get throwing it around.  You’ve been warned. 😉 ) 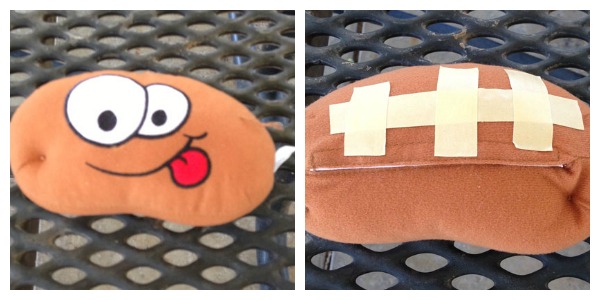 We played hot potato for quite awhile and even added in a couple of extra balls to pass around and add a little twist.  The boys loved it!

Next, We headed over to a field goal kick.  My husband made up this nifty goal post out of PVC pipe and pool noodles.  Let’s just say, the boys were in heaven!  See how to make your own PVC goal post HERE! 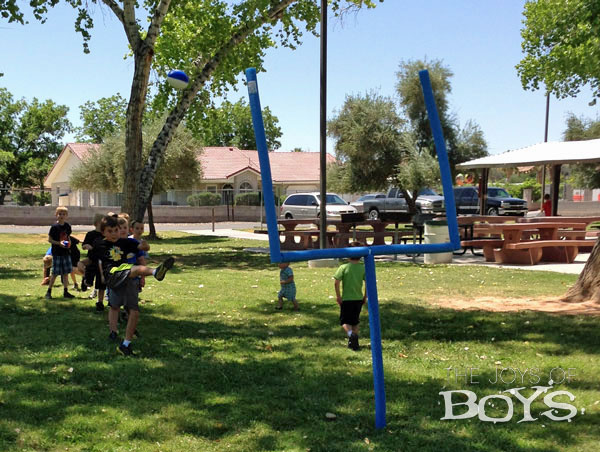 We let the kids who couldn’t kick it through just throw it through for fun but most of the kids got the hang of it pretty quickly. 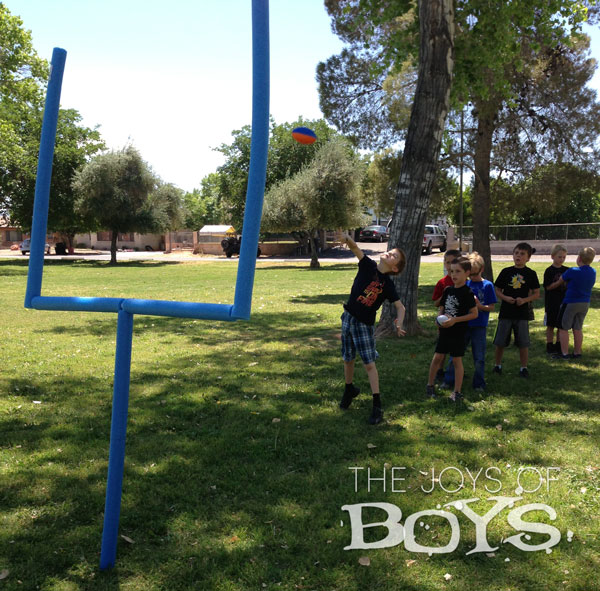 Then we moved onto a target throw.  You might recognize our target from the post we did last year on 5 activities to do with Pool Noodles.  This thing has brought hours and hours of fun to my boys. 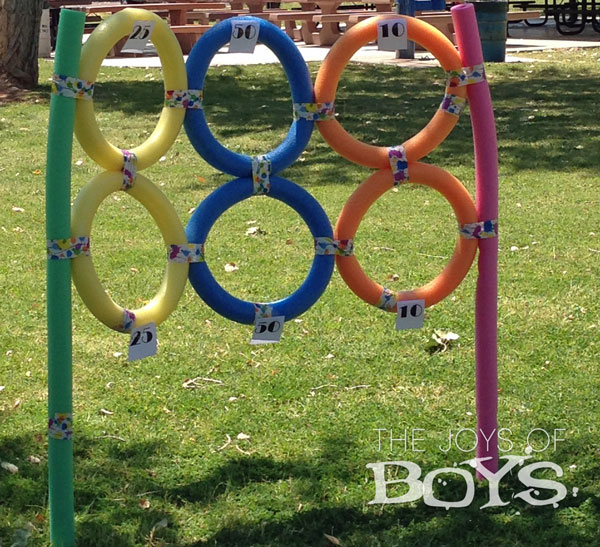 I printed out some paper numbers for points and the kids had a blast trying to get the balls through the hoops to rack up the points.  I should mention that I used all squishy balls or bean-bag type balls.  I didn’t want anyone losing any teeth.  I found the balls all over the place from the dollar store to Target. 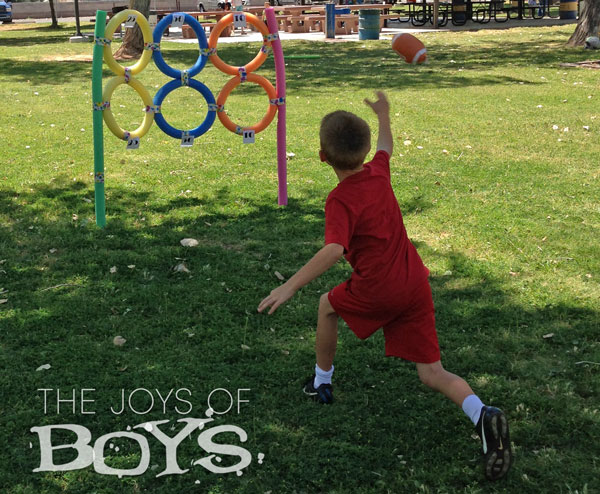 Next was Beach ball Volleyball!  So. much. fun!  I used to love playing volleyball but I hurt both of my wrists in high school (too much piano I’m afraid) so I can’t play the real volleyball anymore.  But a beach ball makes it fun for everyone!  We just set up a badminton net so it was short enough for the kids and I bought several beach balls from the dollar store since I knew they might get popped.  We only had one beach ball fatality.

When the party was over and the kids were waiting for their parents, this is what they came back to. 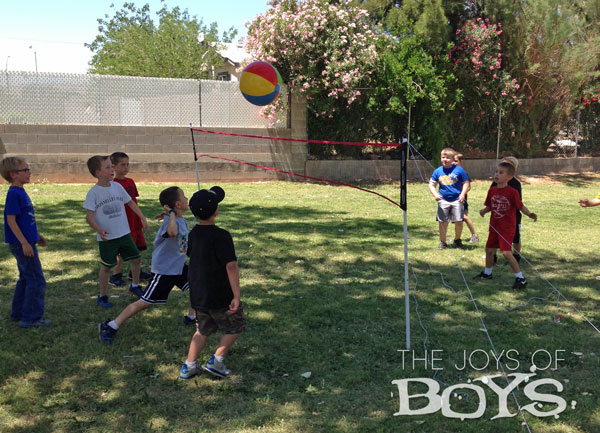 We made pool noodle wickets in our post 5 Activities with Pool noodles as well so we brought them back out for a soccer relay race.  The kids kind of teamed up and raced each other through the course.  It was fun to use beach balls because they were bigger and the kids really had to pay attention to what they were doing. 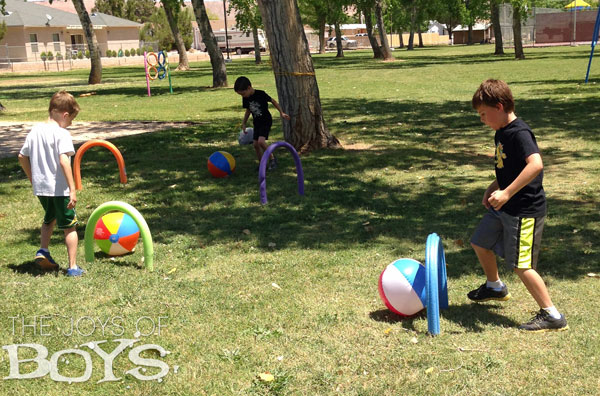 The last game we did was a basketball shoot with the boys having to shoot a basketball bean bag through a hula hoop that another one of the kids was holding.  It kind of seems like we had a lot of games but from my experience with past parties, the boys moved through things fast.  This was the first party we have done where we weren’t done early and trying to entertain the kids. 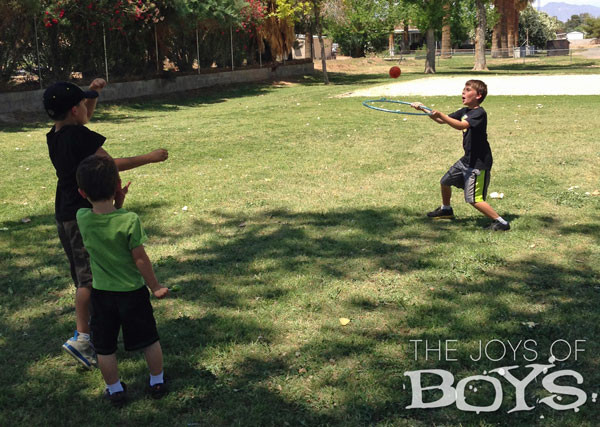 And my boys don’t think you can have a party without a pinata.  No really, they would be totally upset if we didn’t have one at every.single.party.  I found this super cool football helmet pinata at Target and filled it up will all sorts of pinata candy 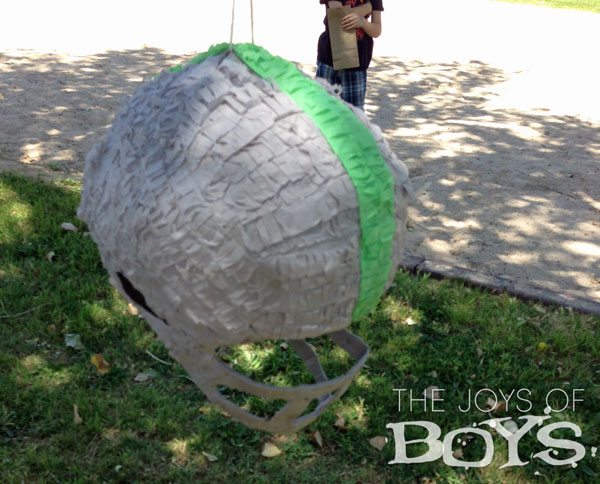 When the pinata was broken and candy scooped up, we opened presents and I handed out our goodies.

For favors I had Sports ball cupcakes ( I blogged about how we made them yesterday here: Sports Cupcakes), 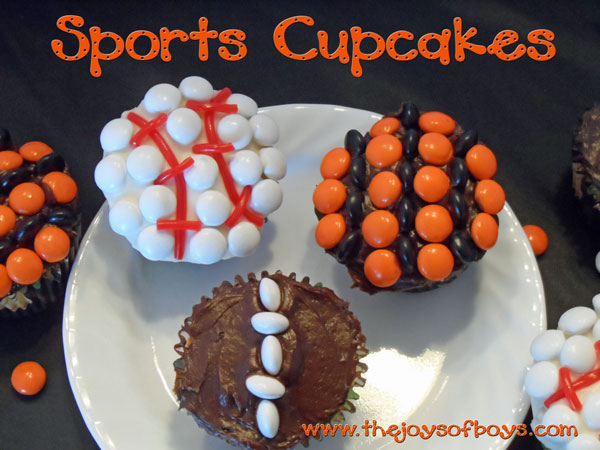 , (they had a baseball too but for some reason I forgot to photograph it.  It was a late night, but aren’t they cute! 😉 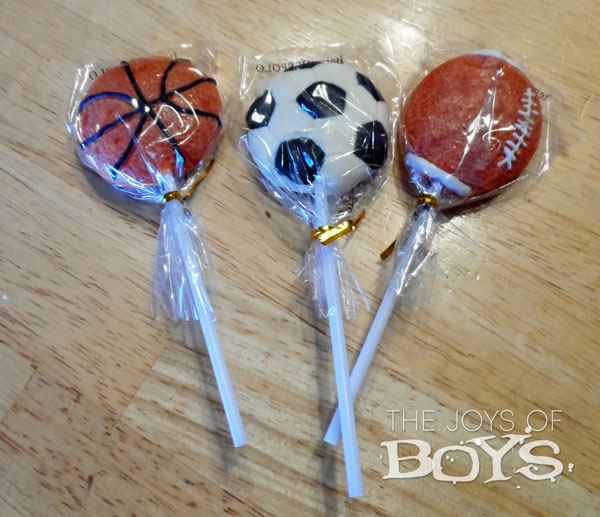 And then Sports Tattoos

I think it is safe to say that everyone went home happy.  It was a pretty relaxed party for me, probably since the commotion was at the park instead of at home. 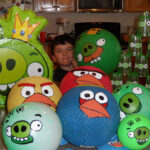 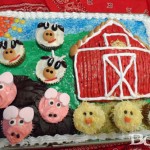